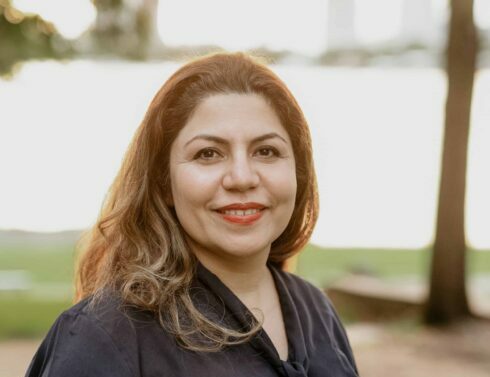 Dr Marcia Amir Abdollahian is a Water Resources Specialist at WaterNSW. As a chartered engineer, she develops tools to manage rivers and dams while providing subject matter expertise in challenging water management issues such as floods and droughts. She is a PhD graduate of crcCARE and James Cook University, and discussed with CRA how completing an industrial PhD in the CRC program contributed to her career development.

Marcia completed a bachelor’s degree in Civil Engineering at the Isfahan University of Technology in Iran. During her undergraduate studies, she found herself interested in water-related subjects such as hydraulics and hydrology. So she decided to pursue this area further in a master’s by research degree in Water Resources Management.

After her master’s degree, Marcia did casual teaching while consulting as a hydraulic engineer working on dams and water distribution systems in Iran. She initially enjoyed the research, teaching, and consulting work. But she gradually realised that she wanted to be an innovator who “created cutting-edge solutions to new problems, rather than applying existing methods to known problems.”

It was at this time Marcia began to explore places to complete her PhD. She became interested in crcCARE in Australia which had a demonstrated link between the university and industry. This attracted her because she “wanted to do an applied project with industry rather than a hypothetical research project.”

crcCARE is a partnership of organisations developing new ways of dealing with contamination of soil, water and air. It is a continuation of the CRC for Contamination Assessment and Remediation of the Environment, which received funding from the Australian Government in the Cooperative Research Centres program between 2005 and 2020.

Marcia’s PhD project with crcCARE and James Cook University was part of a bigger research group which developed methodologies to investigate the sources of contamination in groundwater. She collaborated with CSIRO and many engineering consultancies in this project. The consultancies provided data from important groundwater contamination sites in Australia which helped develop and validate her research methodologies.

Through this project, Marcia also developed a software package to characterise the sources of groundwater contamination for industry use. She appreciated the opportunity afforded by crcCARE’s industry links to present the software package directly to the end-users. She said, “it was a unique opportunity for a PhD student. I was able to learn what industry wants and receive direct feedback from them. Then I could improve the product and create something that end-users will engage with.”

This software package was the primary impact of Marcia’s PhD project. It is a state-of-the-art product which is used extensively by industry. It aids in the clean-up of groundwater contamination sites to deliver better environmental outcomes and reduce costs to industry.

After completing her PhD, Marcia worked in several roles in industry and government. She said, “I have the appetite to be out and in the heart of industry, so I dived in right after I finished by PhD. However, I also navigated my career into government which enables me to work on larger projects with challenging scopes. These projects involve collaboration with industry and universities.”

Marcia’s PhD thoroughly prepared her to tackle these challenging roles. She explained, “In my professional career, I deal with problems which do not have straight forward answers. My research skills, in addition to my technical knowledge, enable me to navigate the problem and develop solutions which have less risks and high chances of success.” She also mentioned that being constrained by resources such as time allows her to be highly creative while also developing solutions.

Today, Marcia uses these skills and knowledge at WaterNSW to undertake complex water modelling, supporting water management which mitigates natural disasters such as floods and droughts.