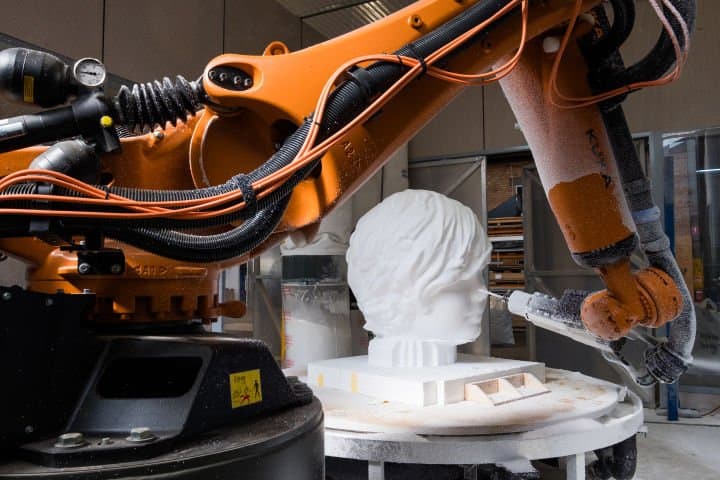 Queensland company Urban Art Projects (UAP) has skyrocketed its international business more than 30% by using a vision-enabled robot with eyes to transform the work of influential artists into gigantic, bespoke urban art works.

And UAP has obliterated the myth robots take human jobs.

The large-scale art pieces UAP specialise in had until now been impossible to produce economically. Before turning to robots, UAP’s clients wanted mass customised products that required time-intensive handcrafting methods. It meant the company struggled to keep up with demand, and thus limited its potential for global growth.

But the Brisbane company has changed the game by pairing human creativity with the efficiency of robots. Now an $8m robot with eyes and creative flair is on the job alongside humans.

This has led to UAP establishing itself as an international leader in the manufacture of iconic art, design and architectural projects. Its projects including the Hudson Yards (New York), Four Seasons (Guangzhou), and Boy Walking by Ronnie Van Hout (Auckland).

The Queensland company revealed its staggering growth after the robotics project received a Cooperative Research Australia Excellence in Innovation Award.

The vision-enabled robot has also seen UAP significantly reduce the need to import bespoke crafted segments from China. In 2017 its import bill for Chinese imports was $6.71m. This has since dropped to just under $2.5m.

In receiving the Cooperative Research Australia award, UAP managing director Matthew Tobin said using the robot had been “transformational” for the company.

He said the outcomes and cultural change the robotics project had delivered “have fundamentally changed the way we think about manufacturing and will continue to influence our digital transformation in the years to come”.

“What UAP is doing is quite incredible – not the least for introducing robots into the workforce and creating new jobs for people at the same time,” O’Dwyer said. “This is a great example of how industry, cooperative research centres funded by the Australian Government, and academic partners can work together to create brilliant innovations and technologies giving our country a significant competitive advantage in hugely competitive global markets.”

IMCRC CEO David Chuter said the Excellence in Innovation Award represented “a well-deserved acknowledgment of UAP’s bold move to break with design manufacturing tradition, and the design robotics team that pushed so many boundaries by pairing human creativity with the efficiency of robots”.

It is estimated design robotics will help grow the Australian manufacturing sector by $400m and create 850 highly skilled jobs in the next 10 years. The manufacturing industry, which contributes to $99bn to the economy each year, with 838,000 jobs, represents 6.7% of the national workforce.

·       CRC for Alertness, Safety & Productivity for its work in developing lighting technologies for improving sleep, well-being and workplace productivity. The work has been commercialised by Australian company Versalux Lighting Systems, and is being used in various settings including the neonatal ward at Adelaide’s Royal Women’s and Children’s Hospital.

The Excellence in Innovation Awards were revealed at the first instalment (virtual) of CRA’s Collaborate Innovate conference, with an in-person event to take place at Parliament House in Canberra in March 2022. For details, see: https://collaborateinnovate.com.au/