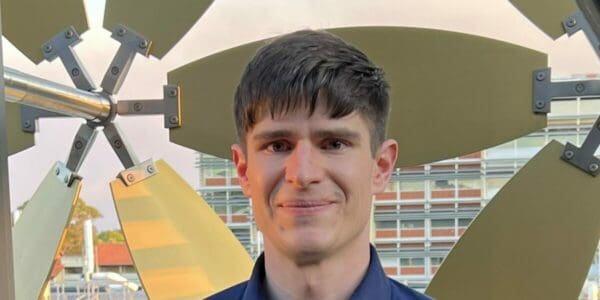 Dr Roman Weh is a Process Engineer at Hatch, a global multidisciplinary management, engineering and development consultancy. He is also the first minted PhD alumni of the Future Energy Exports Cooperative Research Centre (FEnEx CRC) and the University of Western Australia. In his PhD, he developed an innovative method for recovering helium from liquefied natural gas (LNG) production which lead to a provisional patent. He talked to the CRA team regarding his career before, during, and after completing an industry-engaged PhD program.

Roman completed bachelor’s and master’s degrees in chemical engineering at the Mannheim University of Applied Sciences in Germany. Mannheim is a prominent industrial city near large chemical companies such as BASF. Therefore, he had great exposure to the world of applied research, completing 6-month projects with organisations such as the German Aerospace Centre.  After completing his master’s degree, he desired a longer-term commitment to a specific research area and decided to pursue a PhD. Australia was an attractive location for Roman and he began studying at the University of Western Australia in 2018.

Roman began his PhD research in natural gas and alongside his study, he took up opportunities for short-term industry projects. For example, he completed consulting work for Saudi Aramco early in his PhD degree. This allowed him to write relevant research papers while learning essential skills for his PhD research, such as process modelling.  He also did an internship with Woodside Energy, analysing heat recovery processes for a natural gas plant in Western Australia. These early experiences with industry were important for Roman to see the business perspective and made him more employable after completing his PhD.

In 2020, Roman shifted his research topic from natural gas to helium.

‘Everyone’s talking about hydrogen’, he said, ‘but helium is overlooked. That is why I am a bit of a pioneer.’

Roman’s PhD topic fit neatly within the research program of the FEnEx CRC, a newly established Cooperative Research Centre working to increase the efficiency of Australian (LNG) exports and to help create a hydrogen export industry in Australia.

Roman explained that helium is a by-product of LNG production which is expensive to recover at the various stages of processing. But it is a valuable commodity with a wide variety of applications, such as cooling for MRIs or space projects. There are few large-scale helium producers in the world, thus it is a volatile market. But this also presents a great opportunity for Australia as a significant producer of LNG.

Roman’s research project aimed to improve the efficiency of recovering commercially viable helium as a by-product of LNG production. An important part of this process is separating nitrogen from the helium, which was the focus of Roman’s research. He applied a process called pressure swing adsorption, which involves the creation of a kind of filter to trap the helium gas and separate it from other gases. The helium produced from this method is more valuable as it has a higher level of purity, and the process is more efficient. Roman’s PhD research culminated in a provisional patent for this process of helium recovery.

Roman completed his PhD this year, and recently joined Hatch as a Process Engineer. He entered the industrial world because he wanted to broaden his knowledge and application, and tackle large-scale problems like climate change, which he considers an ‘engineering problem’. He said that Hatch was a great opportunity for him as it is an innovative company tackling these issues, and it also highly values PhD graduates. He is excited to help clients adopt new technologies and explore how they can save energy and reduce emissions.

At Hatch, Roman’s focus area has moved from helium to metals, and he has found that many skills he developed during his PhD are useful in his industry employment. These include communication, problem solving, and the ability to deep dive into any topic. He concluded by saying that completing a PhD created many opportunities for him, and that the CRC Program and specifically the FEnEx CRC provided a valuable platform for students to create industry connections.