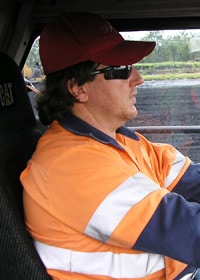 Studies show the risk of driving tired is equal to driving under the influence of alcohol, but until recently there was no reliable way to measure driver drowsiness. In the mining industry one quarter of all fatalities are attributed to vehicles; two-thirds are single-vehicle incidents in which fatigue may play a role.

In his 2007 research paper on driver fatigue, Mark Symmons of Monash University in Victoria found that truck drivers were more prone to having a fatigue-related fatality than car drivers. He estimates fatigue was a factor in about six per cent of Victorian accidents, although the severity was greater due to higher average speeds, the inability of the driver to take corrective action before the accident and the increased risk of head-on collision. Symmons attributes about a quarter of fatalities on Victorian roads to fatigue.

The difficulty in preventing this tragedy stems from the inability to gauge driver fatigue on the road.

“There are no on-road objective mechanisms for its detection – no tool that acts in a similar manner to speed cameras (or) breath tests,” Symmons writes. A police officer taking witness statements at the scene of an accident is reliant on subjective measures of its cause that may be inaccurate.

Work done at Australia’s Cooperative Research Centre for Mining (CRCMining) aims to solve these problems by providing, for the first time, empirical evidence of driver fatigue on the road much the same way as a speedometer determines a car’s velocity.

One of the results is SmartCap –a wearable biofeedback device sewn into the lining of a baseball cap that captures brain waves and, through a brim device, wirelessly relays data to a display in the cab of the vehicle to measure a driver’s mental fatigue. A reading from one to five allows an operator to tell at a glance if they are alert or close to dozing off. When the device registers that the driver is about to snooze, it sounds a local alarm while serious fatigue levels are sent back to base for management intervention. This could mean advising the driver to take a 15-minute “power nap”, check in for a cup of coffee at a crew shack or rotate off the equipment they’re operating.

The idea for SmartCap began while Bongers – who has degrees in space and mechanical engineering and an MBA from Queensland University – was working on his doctorate, developing artificial intelligence systems to detect machine faults in underground mines, sponsored by CRCMining.

He says a CRC industry member was frustrated that they had tried every fatigue-management technology with the intention of integrating one into their product line of mining trucks but none worked.

“These products were enticing but they didn’t measure fatigue properly and were not suited for the mining industry.”

“Everyone is different – some people blink faster than other people for no other reason than because that’s how they blink – the person to person variation was universally identified as a fundamental flaw of these tools,” he says. “There needed to be a way of truly capturing a universal relationship, which is never as trivial as saying ‘if you blink slower than this you’re tired’.”

Bongers worked weekends downloading brainwave patterns from the internet and playing with neural networks before he cracked the code to measure a person’s fatigue levels non-invasively and accurately.

Even then, he says, he wasn’t sure it was a marketable product. It took eight years of studies and commercialisation trials to get SmartCap ready for sale.

“It’s an acknowledgement that good solutions to real problems [are] a genuine step forward in safety and not something that’s just cool to buy.”

Bongers estimates there is a market for SmartCap in up to 2700 mining trucks in Australia. But to get from drawing board to marketplace, EdanSafe had to team up with British multinational miner Anglo American to test the system and seek independent evaluation to prove their results correlated.

Hans Hayes, General Manager of Opencut Mining Excellence at Anglo American Metallurgical Coal in Brisbane, says he was drawn to the project through funding provided by the Australian Coal Association Research Programme.

Anglo American provided two test sites and A$2 million during the product trials. The company now wants to implement SmartCap in its own international operations and offer it to miners and vertical industries around the globe.

Drivers of slow, heavy machines such as haulpaks (“dump trucks”) that may weigh up to 500 tonnes under load are at most risk, Hayes says.

“SmartCap is not a disciplinary system,” he says. “It’s about helping the person manage their fatigue levels.”

Operators of mining equipment are especially susceptible to fatigue because their shift lengths are generally longer than in other industries, Australian Government figures show.

Since 2005, more than 50 drivers have died on mine sites, according to March figures from the Compendium Of Workers’ Compensation Statistics published by Safework Australia, a Government statutory body that seeks to improve work health and safety.

And while the frequency of such accidents in the mining industry has halved over the past seven years, it still records the highest median payouts for accidents that result in injury or fatality (A$16,300) while time lost, with the exception of coal mining, is still climbing.

Australia-wide in the period, 438 fatalities were recorded – two-thirds in single-vehicle accidents where fatigue may have played a role.

But before SmartCap would be accepted, developers had to assuage mine workers’ fear that their minds were being read.

“People don’t like their brainwaves being taken away and stored because the right person looking at them can make certain inferences,” Bongers says.

“The only information that’s transmitted wirelessly by Bluetooth is a fatigue level and other monotonous diagnostic information.”

The drivers influenced the process of implementing the hat and what happens in the cab of the vehicle, says Anglo American’s Hayes.

“Initially, the system was going to be a hat with an inbuilt sensor in the cap that each person had to put on when they started the shift and then at the end of the shift put in a cleaning solution for the next person but that was going to be too complicated,” Hayes says.

“Now, each person gets their own personal cap and all there is, is a small chip that gets charged up in the permanent unit. They take it out and put in the receptacle in their hat that they put in under the brim and that gives them two to three hours of signal and there are three chips and as they’re using one the others are charging up.

And it’s not just on the job where mine-site drivers are at risk – Government studies show the mining industry records the highest rate of fatalities for workers getting to and from work.

Anglo American is considering giving SmartCap to its drivers as they leave mine sites to help them get home safely.

Once the miner is satisfied the product is fit for purpose, it will open it up to other companies around the world.

“We’re allowing other mining companies to trial the product now and companies in heavy haulage and the rail industry – we’ve even had queries from the air force and navy.”

Anglo American is trialling a portable unit for commercial taxi fleets that plugs into the 12-volt power outlets in cars.

Hayes sees potential benefits to civil aviation and public transport and even for deep-sea divers and astronauts. The SmartCap technology might even benefit professional sports players.

“We also see potential to use the hat to evaluate roster systems or shift lengths,” Hayes says. “This is the first chance we’ve got to get factual data rather than some independent fatigue specialist giving an estimate of people’s health.”

Future models may come in the form of a headband – especially for women or those who don’t want to wear a cap – and a baseball cap that is worn backwards (at present, the sensors are only in the front of the cap so don’t touch the appropriate parts of the head when worn this way).

Looking to the future

CRCMining Chief Executive Officer, Paul Lever, says technologies such as SmartCap will ensure the group’s future. CRCMining, now in a “transitional” phase with its last round of public funding behind it, has to prove it can stand on its own two feet within two years.

“The mining technology services business is a large, important exporter for Australia,” Lever says. “It has potential to grow considerably larger than it is at the moment and be a sustainable business into the future – it would make sense for government to continue to support and nurture this industry.”

The CRCMining model is a beacon to other countries looking to lift their research output, he says, but future funding will come from its intellectual property, he says.